Yesterday, at 14:30, I broke the news of Berlusconi’s resignation on my Twitter feed. 27 hours later, the BBC says he’s resigning.

Another example of “I told you so”. Either keep up with the Charlie Edwards rumour mill, or catch up…

In a brief break from studying (the limits of alcohol on my body) at university, I have read with interest that New Jersey is going to host a Formula One Grand Prix with panoramic views of the iconic New York skyline. New York is the second most beautiful city in the world, I am glad it will be showcasing such a fact to the world through the champagne-filled playboy circus of Formula One.

What about the most beautiful city in the world?

Below is my recommended layout of the track for a London Grand Prix. The pit straight would be on Park Lane, and would require temporary paddock and stadia (possibly reconfigured from the stuff put in place for 2012 Olympic spectators) inside Hyde Park. A short left-hander at Marble Arch, then dive inside Hyde Park, left onto West Carriage Drive and round down parallel to the Serpentine. Once past Hyde Park Corner (which will need a bit of reconfiguring) down Grosvenor Place, round the Royal Mews and down Birdcage Walk towards Big Ben. With wonderful views of the Houses of Parliament, the track then goes over Westminster Bridge and a short left turn down towards the iMax cinema at Waterloo Station. Once round the iMax, over Waterloo Bridge and then back along the Embankment to Charing Cross. Up Northumberland Avenue, over Trafalgar Square swinging under Admiralty Arch and up the Mall. Once at the Palace, it’s a right up Constitution Hill to Hyde Park Corner, where a right turn into Park Lane will take you back to the Start/Finish line.

I love the idea of showcasing my home city on the Formula One calendar. What are your thoughts? My track combines some of the world’s most iconic landmarks,

Minister for Care Paul Burstow left the residents of Crownbourne Court in St Nicholas’ Way, Sutton with their concerns unvoiced at proposals to changes in their care provision. He was due to meet them and discuss the future of the care home. Despite an apparent reputation as a good local MP, he has become somewhat “the invisible man” since he got his job working in the Department for Health.

It seems his ministerial photo ops take precedent over his local photo ops.

In a statement from his office, the excuse was: “The organiser has unfortunately exceeded the scope of the meeting to which I had agreed by advertising it widley (sic) outside Crownbourne Court. In my opinion this limits the value of the meeting to my individual constituents. I am of course more than willing to meet constituents to try to address any concerns they have.” Monty Panesar would have been proud to spin as well as that. Disgraceful from our local MP, whose “hard work” is all for a constituency of one: Paul Burstow.

May I just say that:

The city of Leicester has a busier Thursday than most next week. As well as the national referendum, the council, the mayor and the Parliamentary seat in Leicester South are all up for grabs. Despite finishing 3rd in the general election, and with only 7 councillors to our name, the City of Leicester Conservative Association has run a well-organised campaign, spearheaded by Jane Hunt, the Parliamentary candidate and Ross Grant, the Mayoral candidate.

Jane fought in Leicester East, against Keith Vaz in the General Election in May. She managed a 5% swing to the Conservatives, and has a record of fifteen years of campaigning in Leicester and as a councillor in nearby Chalmwood. She has been vocal about her pride of her city, has ran a positive, friendly campaign and has the drive and determination to put Leicester back on the map.

Ross was the Parliamentary candidate in Leicester South last year, and is hoping to become the first directly-elected mayor of Leicester. He has been a councillor in Knighton since 2004, and he is the leader of the Conservatives on the council. He has been a formidable Opposition to the reckless Labour-run Leicester council, dogged by council tax hikes and pithy spending initiatives gone terribly wrong.

There is a lot to discuss on doorsteps, a variety of literature to hand out yet one clear message: the Conservatives will put Leicester back on the map.

– We will restore pride and identity into the City.

– Pour more money into the infrastructure, transport links and road maintenance to get the City moving again.

– Fight to keep care homes for the elderly, Sure Start centres and Glenfield Hospital open at the expense of Labour’s bureaucracy and waste.

We need man power to deliver this message to the people of Leicester. Over the long weekend, we will require volunteers to hit the streets for an hour or two. If you could spare any time at all, please contact Jane Hunt, jane.hunt@leicesterconservatives.com or myself at charlieedwards@yahoo.co.uk

These two candidates are the strong voice Leicester needs, and this weekend, they need your help. 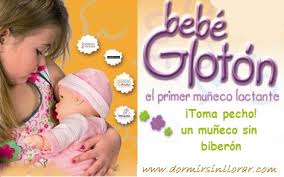 The Spanish toy, Bebe Gloton, which simulates the act of breastfeeding for young girls, is hitting British shores. It is a dreadful idea  that has wider social ramifications, it teaches our girls that their only career choice should be one of mother. Our girls are broody from a young age, and as a result teenage pregnancy increases. There is considerable research that the younger the mother, the more susceptible the child is to a life of crime, early pregnancy, welfare dependency and poor education and career prospects. The cycle of poverty will simply continue.

Sexual profligacy is prevalent among people my age, dangerous to one’s emotional and physical health. Most schoolgirls cannot wait to get out of knee-length school uniform and into something shorter – and more provocative – for the night out.

Back to the breastfeeding toy, this fosters a culture of sexual oppression; while boys are playing astronaut, or soldier, or mechanic, our girls are playing mother. There are young girls who have so much love to give and see a baby doll as an appropriate outlet, and as they grow older having a real baby is still the only antidote to their otherwise neglected miserable loveless lives.

There are ways in which we can remedy the growing number of teenage girls getting pregnant. Education initiatives, sterilisation, segregation and abortion have become woven into the history of this epidemic without failing to stem its rising tide. The failure of society is its failure to condemn the sexualisation of young girls.

Bobby Moore, former England and West Ham captain, who played over 800 professional football games over a career spanning 1958-1978, would have been 70 today. He died in 1993, aged 51, after a long battle with cancer. His memory lives on through the Bobby Moore Cancer Research Fund, set up by his second wife Stephanie. He was the only England captain to lift the World Cup, leading his country to victory in 1966 against West Germany. His greatest legacy is not his superb skill, but his sportsmanship, charm, humility and grace with which he played the gentleman’s game. He is and always will be a great inspiration.

As the debate on the Alternative Vote hots up, the technical arguments against AV have been bandied around for a while now. Yes, it creates a two-tiered system of voters, those who care and can fiddle the system and those … Continue reading →

It should be worth noting that the age of the “Nose in the Trough” MP is over. Last night, MPs rejected the 1% pay rise proposal from the QUANGO the Senior Salaries Review Board. I agree with the fact we should have an independent body making these decisions, but I congratulate Sir George Young, the Leader of the House of Commons, for rejecting the proposals as a gesture to the nation. We are all in this together. For MPs, that comes for a price of £657.

On Friday, the Federal Reserve ruled that the “American banking system is no longer in danger.” It was a triumph for the global response to the meltdown. Bad loans thwarted, market cornering ended, dividends frozen and of course, bonuses for … Continue reading →

What I’ve Talked About:

On The Right Wing
Blog at WordPress.com.
Loading Comments...